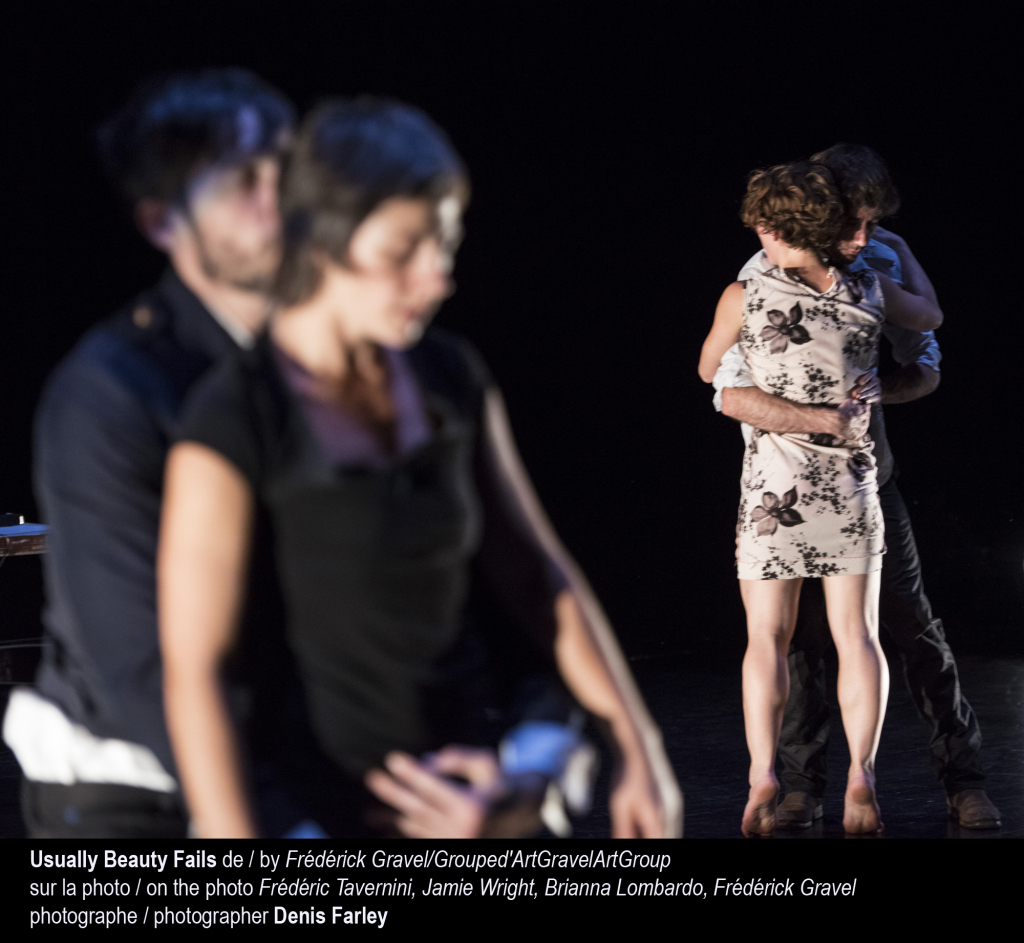 Portland, get ready for Frédérick Gravel!

I was lucky to catch Usually Beauty Fails at the PuSh Festival in Vancouver, B.C. in late January. I had heard rave reviews and some skepticism when the piece toured to Seattle at On the Boards the week prior (where the film we are screening was captured). I was in awe of many parts of this piece – the raw energy of the performers, the incredible live music, the casual humor in Gravel’s addresses to the crowd, and the incredible intimacy that traveled back 30 rows to where I was sitting. Hopefully we will see Gravel’s work live on our stages soon, but until then I’m excited to be able to bring this film version of Usually Beauty Fails to Portland!

Frédérick Gravel is a dancer, choreographer, guitarist, singer, and lighting designer whose work is presented not only in underground performance spaces in Montreal and New York, but at scholarly symposia as well. Gravel cultivates artistic ambiguity, cultural meeting points, the mixing of disciplines, and post-modern irony. He plays with the contemporary zeitgeist; flippant and skeptical. He is complicit with the audience, thumbing his nose at the avant-garde; at the exclusive preserves of the elite. In lucid, offhand fashion, he takes popular culture and establishment culture out of their assigned roles and brings them together.

Socio animalus. Three musicians plugged into the power grid, six dancers ready to explode, the energy of Pop to intensify the beat, the energy of desire to set things ablaze. Quebec’s Frédérick Gravel ignites bodies and blows up the stage in Usually Beauty Fails, a surrealist and unbridled metaphor about our relation to beauty, the shock of love and the challenges of relationships. The performers’ combination of physical restraint and furious involvement produces a nervous dialog made of projected bodies, ruptures, false starts, repetitions and aborted gestures. No more gender-related clichés, all individualities are asserted: desiring and desired beings make use of symbols and their own bodies to better arouse the audience. The choreographer-dancer-musician grabs the microphone to distil with humor and impertinence a speech about dance and humans as social animals. An audacious integration of popular culture and choreographic art; an invigorating and carnal work that posits conflict as art and elevates reality’s imperfections to the rank of most efficient aesthetic.

Once more bringing together dancers and musicians in a space where choreographic show and concert are interwoven, Quebec’s Frédérick Gravel plays with the codes of contemporary dance and pop culture to question their respective canons. Built upon a series of short scenes in the manner of Gravel Works (which itself preceded Tout se pète la gueule, chérie), the work goes by like the songs of a sweet and savoury album about the fury of life, our unease at experiencing beauty and the difficulty in finding harmonious contact points in relationships.

Inspired by the aesthetic of videos where the desire to please is so strong that they become quasi-pornographic, the choreographer exacerbates frontality and tackles the game of seduction in group movements where dancers are as vulnerable as provocative. It is difficult for the public to remain indifferent to this silent appeal. But from one sequence to the next, the atmosphere transforms itself, we are plunged into another universe : guitarist, dancer and sometimes also singer, Gravel grabs the microphone in between two songs, like an irreverent M.C., and takes a few jabs at contemporary dance clichés as he breaks the fourth wall.

In the sections where the duo embodies the paradox of relationships that the body calls for but that the mind refuses, he refines his aesthetic of the accident, using physical constraints to generate conflicts that in turn produce movement. Combining choreographed and reflex gestures, the dancing results from a succession of frictions, accidents and failures that reveal the nature of beings endowed with wild vitality and unstoppable perseverance despite their repeated setbacks. No exuberance, no lyricism, no crisis nor any other theatrical construction. The movements are raw. The hips and the eyes carry the strong emotional and sexual charge. Dancing bodies in the instant of instinct. Animality and candor of the human beings stripped of his or her masks and judgment filters.

As a choreographic entity integral to the show, the live music sets the tone and gives a color and a direction, or on the contrary, appears to break an image, sweeps through a scene like a tidal wave. Perfectly integrated to the mise-en-scene, the bodies of the musicians bring us back to the reality of the show’s space-time, offering the spectator a perspective on the fiction created through the abstraction of the dance.

Like all previous works by Frédérick Gravel, Usually Beauty Fails was created in close collaboration with all members, dancers and musicians of GAG : the Grouped’ArtGravelArtGroup. (Text: Fabienne Cabado / Translation : Michel Moussette)

WATCH AN INTERVIEW WITH FRÉDÉRICK GRAVEL ABOUT USUALLY BEAUTY FAILS

READ A REVIEW OF USUALLY BEAUTY FAILS BY VANGUARD SEATTLE