Risk and You Shall Receive

Response by Beth Thompson (Find more info about her and her work at www.bethjthompson.com) 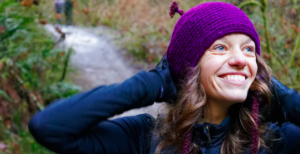 The truth of the matter is I feel safe walking into Risk/Reward. This is a style of performance I identify with; new work made by the performers and using a variety of traditional and post-modern techniques of idea crafting. In the midst of that sense of belonging, I’m so appreciative that these artists did not shrink from pushing me against that comfort.  At times they told us less than we might want to know, they made us reflect on our most liberal and “educated” assumptions and sometimes pushed against our expectations of what a performance piece should require or restrict.
From my totally biased perspective, the Creation and External Reflection of Identity was a running theme. Several performers gracefully and fully let us experience them intimately, inviting us past/through/beyond the storytelling of histories and into simply being with one another’s bodies. From that intimacy, creators crafted reflections of the way they have been formed and boxed by external creations of gender and race.
Crafted by Producing Artistic Director Jerry Tischleder and the Festival Director, Spicy With Katie Watkins, this year’s Risk/Reward is a full and cohesive night of art and expiration. I’m grateful to them for organizing this weekend and for inviting me to respond with these short thoughts. And, I’m grateful to the artists for continuing to push themselves and the audience against the boundaries of The Known, even in a venue where we might be comfortable.
Wonder Full by Britt Karhoff
A powerful performer with a clown’s instincts and a dancer’s gravity, clinging to a heavy table, trying to keep everything together. I was struck by the intimacy of simple acts; building a table, arranging her space. I felt invited into her work (which is to say, her being). And, as she stopped, breathing hard, dropping her head on the table….I was struck by how hard, how athletic it is to set up a life people want to see. A comedic chorus of “Yes. Yep. Uh-huh.” reflecting the language that women are set up to perform. The struggle to stay sane when the echo chamber of external expectations and stories ensues advancing into hysterical and exhausting. Invited back into the intimacy of this performer’s being as she lies on the floor, breathing hard, when the lights eventually come down.
Planet Pink by Bouton Volonté
I had been looking forward to Volonté’s work and they did not disappoint. A mesmerizing mover. A brilliant eye for beauty. A confident and compassionate Leader of Audience. A lover of Maria from The Sound of Music. Volonté kept their majority white audience on the hook for their privilege while also compassionately and generously inviting us to appreciate their experience of exclusion and then the embodiment of magnificent femme.  A stage littered with luggage and a mirror center stage which, from my seat, had a reflection of the exit sign. All of which felt like an invitation to exit our assumptions about how gender might play as we let the binary slip away.
In The White Frame by Angel “Moonyeka” Alviar-Langley
Early movement drawing with Boxes/Bodies. The impossibility of Balance and hard edges of Identity reflected as bodies move in and out of shadow, balancing themselves on the lines of the box of who they are/would be/can be seen as. The power of the very young bodies on stage; confident, communicative, naturally carrying the ability to impress and discomfort the audience. And, finally, the pain of an Alphabet Book describing limitation, judgement and racism being read aloud…the building blocks through which the world is understood are the accompaniment to which our young, confident dancer moves forward.
War by Eli Steffan
A Dress, A Tarp, A box of Glue and a Deck of Toxic Masculinity. A sense of tension between the desire to play and a reality that no one wants to be seen winning. A ritual act that is never explained, a gross mystery. An act of submission by the performer to the audience. The holders of the keys of masculinity never knowing what the rules are.
Bayanihan: A Collection of Physical Tales Created by the Captivating Cheryl Delostrinos

Simplicity, Something Known and Exquisitely Personal. The Vulnerability and Intimacy of Cheryl’s body as it bounces between something akin to violence and expanse. Too much to recognize in the dance between two lovers as they direct their bodies through their need for and dependency on the other. Foot dances. Seeing a group of woman dancing simply; a quieter, more reserved “party style” movement that allowed each dancer to both self express and to stay singular. I loved seeing these female identifying bodies on stage claiming space in an act that embodied both joy and simple independence; they dance for themselves.