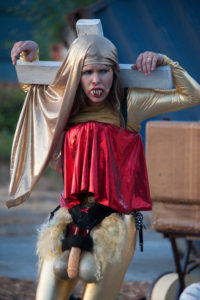 Another Risk/Reward Festival favorite, Queen Shmooquan, is back in Portland — only this time, she’s in a fight for her mortal soul: Part performance art/musical/comedy, our Modern Day Oracle must face the internalized neo-fascist, patriarchal Weiner-ball Priesthood aspects within herself, in a desperate attempt to free her hopeful spirit from a dark wave of doom.

The hybridized practice of performance artist/comedian, vocalist, and musician, Jeppa K Hall is difficult to describe or even categorize. Subsequently, she has developed a cult-like following and her performances have lent themselves to be featured in just about every type of performance venue imaginable. Through her alter ego QUEEN SHMOOQUAN (the super-real modern day oracle), Jeppa generates solo psychedelic theater performances that merge pop-art clowning with multi-media performance art, music, and non-linear storytelling to create thought provoking, hilarious music and theater that push the boundaries of contemporary and traditional performance mediums.

In Queen Shmooquan. Dark Wave., The Queen will shape-shift from her lucid plain-talking self into characterizations of the bizarre and dissonant, yet normalized imagery of our current American political and social landscape. Utilizing non-linear storytelling, faux stand-up comedy, movement, and song, along with layered DIY costuming and props, the Queen will seamlessly transition from one costume, performance medium, to the next, resulting in hilarious, fast paced, absurd and surrealistic music and theater. Queen Shmooquan is a trailer park cultural anthropologist, an explorer of subconscious manifestations of fear, self-loathing, violence and hatred that are the dominant features of American mass culture. Her world is one that critiques, celebrates and lampoons American “independence” and its fetish for freedom.