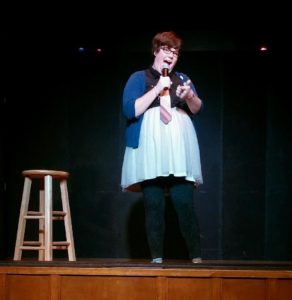 I love the performance community in Portland. It’s small enough that I hug at least 4 people I know at each show, but big enough that there are always 8 new people to meet and then hug at the next show. This community has a real intimacy to it. Tonight when I was attending the Risk/Reward Festival’s 10th Anniversary show at the Artists Repertory Theatre, I introduced myself to the person who sat down next to me and they responded, “I know who you are. We performed at Risk/Reward together 2 years ago when you pulled me up on stage as a participant.” Color me honored and blushing and excited, and now having a friend to talk with about the show — all made possible by Risk/Reward!

The 2017 Risk/Reward Festival of New Performance brings together a body of the strange, the blossoming, the poetic, the fabulous, the dying, the risky, and the cuttingly comedic in this year’s installment. Those are not listed in a particular order as every piece manifested each in it’s own glorious presentation. The show as a whole demonstrated both private battles and personal growths, as well as what we’ve all been feeling lately with this new regime and it’s centuries old father (patriarchy).

Linda Austin’s A world..a world opened the offering and had me meditating and feeling the way I do when I read the newspaper while intermittently checking my phone updates as the radio plays on in the background. I often get stuck in a brainwave about mortality, and Pam Tzeng’s darkly funny and horror-laden “A Meditation on the End” by Jo-Lee put me in that purgatory space from the scary movie where one possibly knows they are about to die horribly, but still takes the time to remember something dear and mundane from their childhood. Queen Shmooquan (Jeppa Hall) has more tiny penis large balls enormous hairy vagina than any of us mortals. Queen Shmooquan. Dark Wave. was acidic and funny and relatable in ways I never knew possible. If I had known the words to the songs, I would have sung them very loudly with the queen as she regaled us. Also, two words: tampon tassels. Pepper Pepper’s Diva Practice (Solo) was interactive, commanding, classic, and had me gasp as Pepper stripped off the pieces of their corporeal persona in an intimate portrait of a diva at work and play in a solo vignette. Ending the night in a poetic plea for space to speak, breathe, and be, Donal Mosher and Shannon Stewart’s Strange Gardens was an eloquently simplistic evolution of dreams and personal narrative of the inner and outer relationship to one’s body, HIV, and scientific symbolism.

And of course nothing I could write now could really paint you as great a word picture as seeing these pieces in person. As a performance artist myself, this amalgam of work put me in that space where you have ten brainstorms at once and want to write every feeling down and start performing yourself right there from your chair, as well as tell each and every performer what their pieces meant to you. I love the performance community in Portland. There are not enough festivals or platforms like this.

*author would like to note that they did not get a chance to see Kiana Harris’ piece DIVINE, although they are quite sure that it is divine and that you should arrive early to see it!