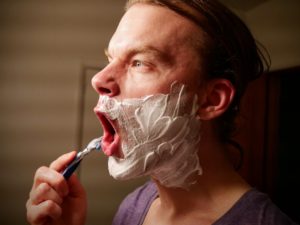 War is an exploration of how masculinity constructs and whiteness through a reimagining of the card game War. Using faux-rituals around a deck of “male-socialization” cards, Eli and a volunteer will play until the game is won. In their Risk/Reward debut, Eli asks the audience to consider what winning really means; how far are they willing to go to finish the game?

Eli will ask the audience for a volunteer to come on stage to play a game of “War.” They will explain that we are going to play with a special deck, “a deck dedicated to teach boys to be men.” Eli will describe the rules of the game: each player will start with half the deck; every round each player will flip over one card and read what is written on it out loud; then the volunteer will decide which card wins; this will be repeated until one player has all the cards and wins the war. The point of this game is to explore how we understand the interaction of different aspects of male socialization and the underlying structures that create and reinforce our personal experiences, while also examining how white-supremacy and racism are integrally intertwined with dominant notions of maleness. How has the audience experienced and perpetuated male-socialization (either as people taught to be men and/or people subjected to male dominance), and how do racism and sexism feed each other?

Eli Steffen is a Seattle-based artist whose work focuses on the intersections of community, culture, and identity. Eli seeks to understand what binds us together and how that relates to personal representation, violence, and belonging. Most recently Eli has performed with Syniva Whitney/Gender Tender, the A.O. Movement Collect, Future Husband, and Vanessa Dewolf. Eli is a founding member of Future Husband, an international performance collective. Eli’s work has been shown at Dixon Place, The Martha Graham Studio, Richard Hugo House, Seattle City Hall and the Museum of History and Industry.

Corinne Manning (performer) is a prose writer, literary organizer and performer whose fiction has appeared in Story Quarterly, Calyx, Vol 1 Brooklyn,Moss, The Bellingham Review,Southern Humanities Review, and is forthcoming in Wildness from Platypus Press. Additional stories and essays have appeared in Literary Hub, Vol 1 Brooklyn,Drunken Boat, Arts & Letters, anthologized in Shadow Map: An anthology of Survivors of Sexual Assault (CCM Press), and recognized as notable in The Best American Series. Corinne has received grants and fellowships from 4 Culture, Artist Trust, and the MacDowell Colony and founded The James Franco Review, a project on visibility and reimagining the publishing process.

SEE A VIDEO OF ELI’S PAST WORK

BUY TICKETS TO THIS YEAR”S FESTIVAL