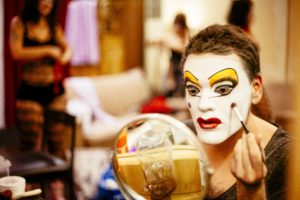 LOOKING FOR TIGER LILY utilizes song, drag, and video to put a queer spin on ancestral, traditional storytelling; what it means for a mixed-race person to grow up seeing their heritage filtered through white normative media.

Carla Rossi, Portland’s premier drag clown and (in her words) “ghost of white privilege,” confronts white supremacy and the confusion of “mixed” identities – of living in-between, particularly sexually and racially. LOOKING FOR TIGER LILY forces Carla (but also Anthony) to trace personal and ancestral lines to work through and recreate childhood memories, namely watching Tiger Lily’s “Ugg-A-Wugg” song from Mary Martin’s Peter Pan. While this is technically a “one-woman-ish” show, a large element of the show – the storytelling – comes through with the use of video and slides, inspired by the Power Points Anthony’s father used to give as a Grand Ronde Tribal social worker. His father’s workshops for State social workers taught the importance of the Indian Child Welfare Act and the lived realities of assimilation and intergenerational trauma, and included typical “dad jokes,” pictures of the Chemawa Indian School where he grew up, and his family history within the Tribe.

VIEW A VIDEO OF THE GENESIS FOR THIS PIECE