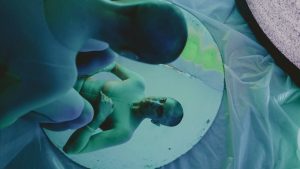 Artist Olivia Louise and team bring a poignant and visually stunning look at how we see ourselves in a world surrounded by technology.

A cyborg-feminist rediscovery of the Greek myth of Narcissus that explores the contemporary dance of selfhood within technology.

We are thrilled to bring Kelly Nesbitt’s humorous and touching film, Penny – The Conduit, to Portland audiences and beyond.

PENNY expresses our collective grief and despair, yet exemplifies the unquenchable hope that lies deeper in the human heart. Death, mourning, and healing are overt themes of this piece, as exemplified by Penny’s awkward yet earnest commitment to meditation, nature worship, and conversations with a radically different kind of deity.

KELLY NESBITT is a multi-disciplinary performance artist, midlife warrior, and frontline healthcare worker who plays at the intersection of humor and healing. With extensive training in the field of humor, Nesbitt has been awarded grants for the creation of solo and interdisciplinary ensemble performances, toured internationally, and collaboratively produced numerous DIY community arts events since 1999.

MAD COMPOSER LAB, aka Kennedy, is an innovative and versatile composer whose imaginative music captures beauty, bursts of melodic and rhythmic energy. His compositional vocabulary is sought after by many collaborators who seek authentic but familiar sonorities. Kennedy’s scores can be found in a number of studio and independent productions including At The End of The Tunnel, Sightings, and This Is Us. In addition to composing, Kennedy’s orchestrations and arrangements can be found in films such as Deliver Us From Evil (Screen Gems), The Monkey King, Priest (Screen Gems), and Drag Me to Hell (Universal).

His concert repertoire includes String Adagio no. 6, Western Sketches for Orchestra, Songs of the Seasons, 5 is Prime : 4 is Magic, and numerous experimental works for combinations of traditional instruments and ones created by Kennedy at the Mad Composer Lab. 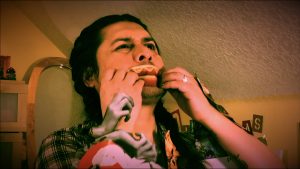 In a new cut of the full-length documentary-style digital devised theatre work, Moriviví Theatre and Hand2Mouth premiere a work that will speak to so many of us about our experiences during the pandemic of the last year and a half.

Distancias is an exploration of the distance we have been experiencing during the pandemic. Through a series of vignettes, three Latinx artists explore feelings of isolation, separation anxiety, and loneliness while also traversing their longing for a homeland, a home-people, a communidad that is rooted in their cultura.

Giovanni Alva is a theatre artist who likes to tell stories and help others tell theirs. He holds a BA in theatre arts from Humboldt State University and has worked in Portland at Milagro, Portland Playhouse, Action/ Adventure, CoHo, Roosevelt High School, and Hand2Mouth. Robi Arce is an actor, director and physical theatre poet. Robi holds an MFA in Ensemble-Based Physical Theatre from Dell’Arte International. He has performed, toured, and lead workshops in Mexico, Venezuela, Puerto Rico, and the U.S. His work is diverse, from theaters to churches, plazas and schools, bringing theatrical and educational shows to all. Fueled by social justice and change, his passion is to create a physical, dynamic and poetic theatre that connects with people as sports connects with the fans. Michael Cavazos is a Queer Chicano theatre maker and visual artist. He is the author of the play “Gritos y Chismesitos” and co-author of “Chic and Sassy” and “Chic and Sassy: The Higher the Hair, the Closer to God.” Before moving to Portland, he was a member of the sketch comedy troupe Gender Offenders and performed on many New York City stages, including the Beechman Theatre, Cherry Lane Theatre, The Culture Project, and P.S.122. Michael directed and performed in the theatrical concert, “Universo,” for Hand2Mouth and has worked with Imago, Milagro, Crave, Profile and Portland Center Stage. He is a company member at Hand2Mouth and is co-directing the new musical “Bad World” with Crave. He is part of two cross-cultural theatre collaborations with companies in Egypt and France. His art was recently selected as part of RACC’s new public art collection: Capturing the Moment. Michael is one of five Oregon performing artists to receive the 2021 Oregon Arts Commission Individual Artist Fellowship for artists of outstanding talent, demonstrated ability and commitment to the creation of new work.

VISIT THE MORIVIVI THEATRE WEBSITE FIND OUT MORE ABOUT THE FULL-LENGTH PROJECT: DISTANCIAS 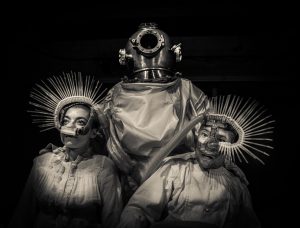 In their Risk/Reward Festival debut, Wobbly Dance brings an exploration of oceans.
Photo by Kamala Kingsley.

“TIDAL” is an exploration of the relationship between the rhythm of mechanized breath and the rhythm of the oceans. Breathing masks and ventilator tubing transform into diving gear and different creatures. An ancient diver, who calls the ocean home, draws us into his world. We fall, we dream, we dive.

Wobbly is a multi-disciplinary performance company in Portland, OR. Based on improvisation, authenticity, and a touch of Butoh, Wobbly is the unavoidable exploration of the body weathered by life. Wobbly is and is not dance depending on the day and which of us you ask, but we move. With relentless fascination, we still move. Sometimes small and caught on film. Sometimes bigger, outdoors and wild. Wobbly is a way of life, an expression of the belief that disability is a natural variation of the human form and in this variation there is art. With immersive environments, by engaging the senses, Wobbly invites the viewer to step into new worlds of possibility.

Wobbly’s mission starts with the belief that to present a disabled body onstage is a radical act capable of stitch by stitch transformation of the cultural fabric of our community. We believe that performance art cannot happen in isolation. Instead, it is something that must occur within the infrastructure of a larger community. By making our work largely within non-disabled contemporary dance contexts, we have promoted greater standards of accessibility in the theater community. Sometimes this access is architectural but more important than increasing physical access, we believe that by using our bodies in performance we coax audience members into a broader definition of art, beauty, and the lived human experience of people with and without disabilities. It seems to us that making a home for ourselves in the contemporary dance community has gone further towards promoting the full integration of people with disabilities in society than any political action on our part ever will. 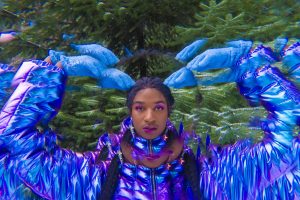 Princess Bouton previously graced the Risk/Reward stage in 2018 with her dance piece Planet Pink, bringing a mix of modern dance, vogue, and contemporary performance elements in a dreamlike landscape that we are still thinking about three years later. Welcome back to the festival, Princess!

On January 6, 2021, Princess Bouton got the keys to her own production space, Last Laugh Studios. These are a few of the first projects she produced in the space; Her first laughs at Last Laugh.

Princess Bouton (she/her) is a Black Transfeminine freelance filmmaker and performance artist based in Portland, Oregon. She graduated from the Portland State University Film Program in the spring of 2020. Her work often incorporates movement art and explores topics of intersectionality and pleasure activism.  She has a dance background that includes modern dance, ballet, and vogue and she creates from a place that draws from each form. Princess Bouton is also a community builder and organizer in the Portland Kiki ballroom scene and is the princess of the kiki House Of Flora. The QTPOC models seen in her work are often individuals from her local queer community, who she invites to be highlighted and celebrated.